I have never had anyone pull a gun on me. I have never heard gun shots in my neighborhood. I don’t know anyone who has been shot.

The closest I have ever come to gun violence is that I know people who knew people who were killed in the Tree of Life synagogue shooting in Pittsburgh last year.

So why am I standing here tonight? I don’t have a personal story to tell. I can’t pull on your heart strings by talking about a loved one who was killed or maimed by someone with a gun.

And I can tell you this. I am mourning and I am appalled and I am angry and I am frustrated and mostly I am frightened. For myself. For my congregation. For my community. For all of us.

I mourn every day when I hear of yet another death by gun. A suicide. A woman killed by her lover. A child caught in the crossfire. The ones who are innocent and the ones who are guilty.

I am appalled that school children say goodbye and “I love you” to their parents in the morning and they really mean it, because they fear it will be their last chance to say those words.

Just today I read a quote from General Michael Hayden, who said “We’ve had more Americans killed in high schools in this last year than have been killed in Afghanistan.” No wonder our children fear for their lives.

I am angry that my congregation must waste precious resources hiring armed guards to protect us in prayer, because there are people who in their broken minds believe that it is OK to gun down others while they pray, whether it be in a church or a mosque or a synagogue.

I am frustrated by our government’s leaders who have rushed to protect us from vaping and lettuce but not from guns.  And, my friends, we are swimming in a sea of guns.

But despite all of that, I am hopeful. Because you are here. We are here.

We understand that we cannot turn our backs. We have a moral imperative to stand up, to speak up, to remind our nation that we must mourn those who have died, and then we must stop weeping and honor their memories by doing everything in our power to end the violence.

In Judaism, the obligation to save a person’s life eclipses all other commandments. In my commandment-driven tradition, which has rules for virtually everything, all of those rules can and must be set aside in order to save someone’s life.

The Talmud teaches that if you save one life, it is as though you have saved the entire world. The entire world. When the idea of saving the entire world, or just the United States, sounds daunting, I think about the words of Rabbi Tarfon, who some 2,000 years ago said:

“The day is short and the work is great. It is not your duty to complete the task, but neither are you free to desist from it.”

And that too gives me hope, because I know that the task is too great and I am too small. But doing whatever I can to help save one life? That is within my grasp.

I can give to the Brady organization every month. I can write letters and make phone calls. I can talk to my friends and family and my congregation.

I can come to vigils like tonight’s, which I know we will have to hold year after year, because it took time for us to get to this point and it will take time for us to turn around.

As we go forward I pray that we will be carried by the memory of those whom we have lost, and be strengthened by our resolve that their deaths were not in vain.

I have faith in us. I have faith that we are willing and able to be God’s hands, doing the important work of making our world a safer and better place for everyone.

May we be blessed to continue to do so, together, knowing that the task is great and the day is short, and that every small step we take matters.

This is the speech I was honored to give as a featured speaker tonight at a Brady Campaign vigil in memory of those who died from gun violence. 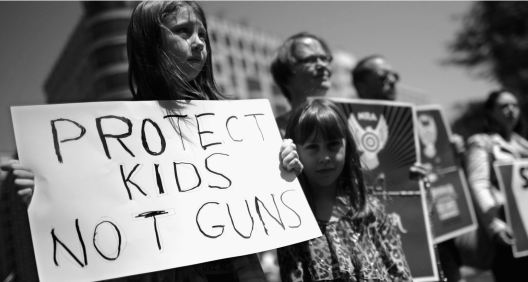 2 thoughts on “Mourning & Acting: Honoring Those Who Died”