It rained all day here in Sarasota. Floridians are more accustomed to rainstorms that come and go, sometimes several times a day. Between storms it can be sunny, hot, and steamy. Today’s rain was steady, under a grey sky without a drop of sunshine.

It doesn’t help that we are in the midst of a pandemic that has struck Florida with a frightening ferociousness. Even in little Sarasota the numbers continue to climb, and my phone has been ringing with increasing frequency, with calls from congregants who are experiencing one kind of crisis or another – spiritual, physical, mental, financial, or existential. Sometimes several at once.

In our imaginations, summer is an idyllic time… rope swings over watering holes, concerts on the town square, making lifelong friends and memories at camp. That might be a little too Norman Rockwell, but as the years pass, memory fades and nostalgia steps in.

The historic truth of summer is anything but idyllic. Over the millennia, terrible things have happened to the Jewish community in the heat of summer. The ninth day of the month of Av, which falls in late July or early August, marks the destruction of both Temples in Jerusalem and many other terrible episodes in Jewish history: Expulsions from England in 1290, France in 1306, and Spain in 1492.  And in more recent memory, the mass deportation of Jews from the Warsaw Ghetto on this very date, taken to the concentration camp called Treblinka.

We have promised to never forget the Holocaust, and this date, called Tisha B’Av, is a reminder that there is much to remember from throughout our history. But that’s only part of the story.  There is also the future to consider.

The Shabbat immediately before Tisha B’Av is called Shabbat Hazon, the Shabbat of Vision.  We look to the past, and use that memory to create a vision of the future.  “I have a dream,” said Dr. Martin Luther King.

Today I am drawn to the words of Representative John Lewis, who died this week. This hero of the civil rights movement spent decades as a congressman, striving to make our nation a better, safer place for all Americans.

“We must use our time and our space on this little planet that we call Earth to make a lasting contribution, to leave it a little better than we found it. And now that need is greater than ever before,” he said.

Congressman Lewis’ vision for the future is one that can guide us even on the most depressing days, even when the rain refuses to cease, even when the disease ravages our communities and our economy, even when selfish people refuse to wear face coverings that can protect others, even when anti-Semites continue to desecrate our synagogues and sacred spaces.

He has asked us – all of us – to be visionaries. To contribute to the good of all. To waken from our dreams and roll up our sleeves and do the hard work of making this world a little better than before. 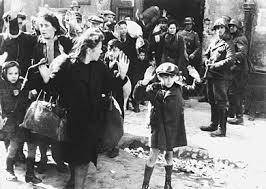 A small boy and other Jews in the Warsaw Ghetto are sent to the Treblinka death camp on Tisha B’Av, 1943.